Hey! I know I’ve gotten really bad about posting on the blog but not really writing anything. The truth is that I have been feeling super uninspired lately, so I’ve not really had much to say. I’ll try to get better, but no promises.

On to the theme of today’s post though… Pride. Specifically, LGBT+ Pride. Every June rainbow flags start popping up everywhere, the parades happen, and the whole world seems to collectively come out to show their love and support for the LGBT+ community. But it’s the constant fear of hate that keeps me in the closet. It terrifies me, paralyzes me even. Every year I tell myself that I’m going to come out, and I never do. I’m 28 years old and fear has kept me from being open all this time. SL is the only place that I have felt like I could be “myself”. If I had a perfect body, a perfect face, and a literally limitless wardrobe. BUT I can at least be gay; I can flirt with guys and walk around in a leather harness and not really gives a damn.

I hate being closeted. And I hate being gay even more. I know that homosexual attraction is natural, that it isn’t something that can be changed on and off like a switch. I know this. But every part of me just feels that I’m wrong for being gay. I was raised in an extremely religious household (to put it lightly), so homosexuality wasn’t just considered sinful, but it was also something to be made fun of. And because I liked to play with my sister’s dolls, dress well, and had an obsession with flowers, I was a target sometimes. My mother and her friend would spend hours “deprogramming” me. The “therapy” started to become sexually explicit when I was a preteen. I learned to hate the thoughts that I had and to hate myself as well. And I’m somehow, inexplicably, terrified of coming out and either disappointing my family or proving that I am just a pervert. I feel like I can’t win.

After a brief time when a “friend” from church tried outing me after I moved back to Indiana in 2009, I’ve been living as a “straight” man. For the most part, anyway. There are a few people that know; an older adoptive sister who is gay herself; an older biological sister who was excommunicated by our mother; and some people from my previous and current job. But apart from me going to the wedding of a lesbian friend and to Chicago Pride last year, I try to stay away in fear of “outing” myself. My grand plan this year was to head to Chicago for Pride again, and finally come out after wimping out last year. Well, those plans fell through because a) lack of money; & b) lack of friends to actually go with. So here I am, sharing more than anyone cares to know on a Second Life fashion blog. I’m venting, really. I’m a very lonely person; I talk to very few people in RL and I have only one remaining friend in SL. So, this is me, letting it all hang out. Almost literally, in this outfit.

For closing this post, I just want to say thanks to second life for being a least some outlet where I can be “myself” and not be worried about backlash. I can’t decide if it’s been good for me, or if it’s just been a roadblock to me actually being myself in RL. I dunno. But thanks, anyway I guess. Oh, and Boystown was the first gay SIM I visited back in 2009, so I couldn’t think of a more fitting place to take pics for a Pride-themed post.

Now that all of that crap is out of the way, goodnight, and you’ll find the credits and SLURL’s at the bottom. Please, please, please be kind to everyone. You never know what’s going on on their side of the screen. Goodnight! 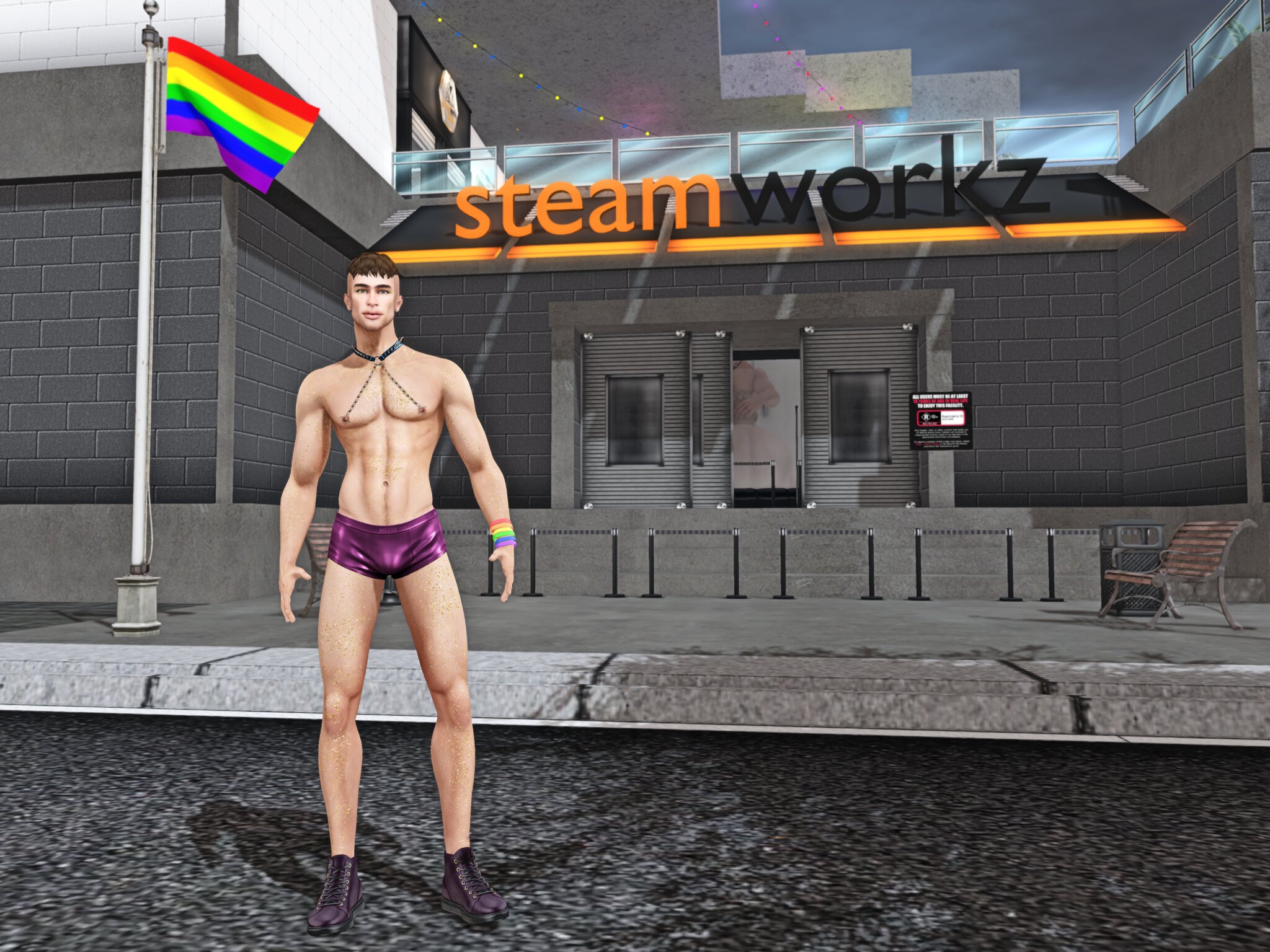 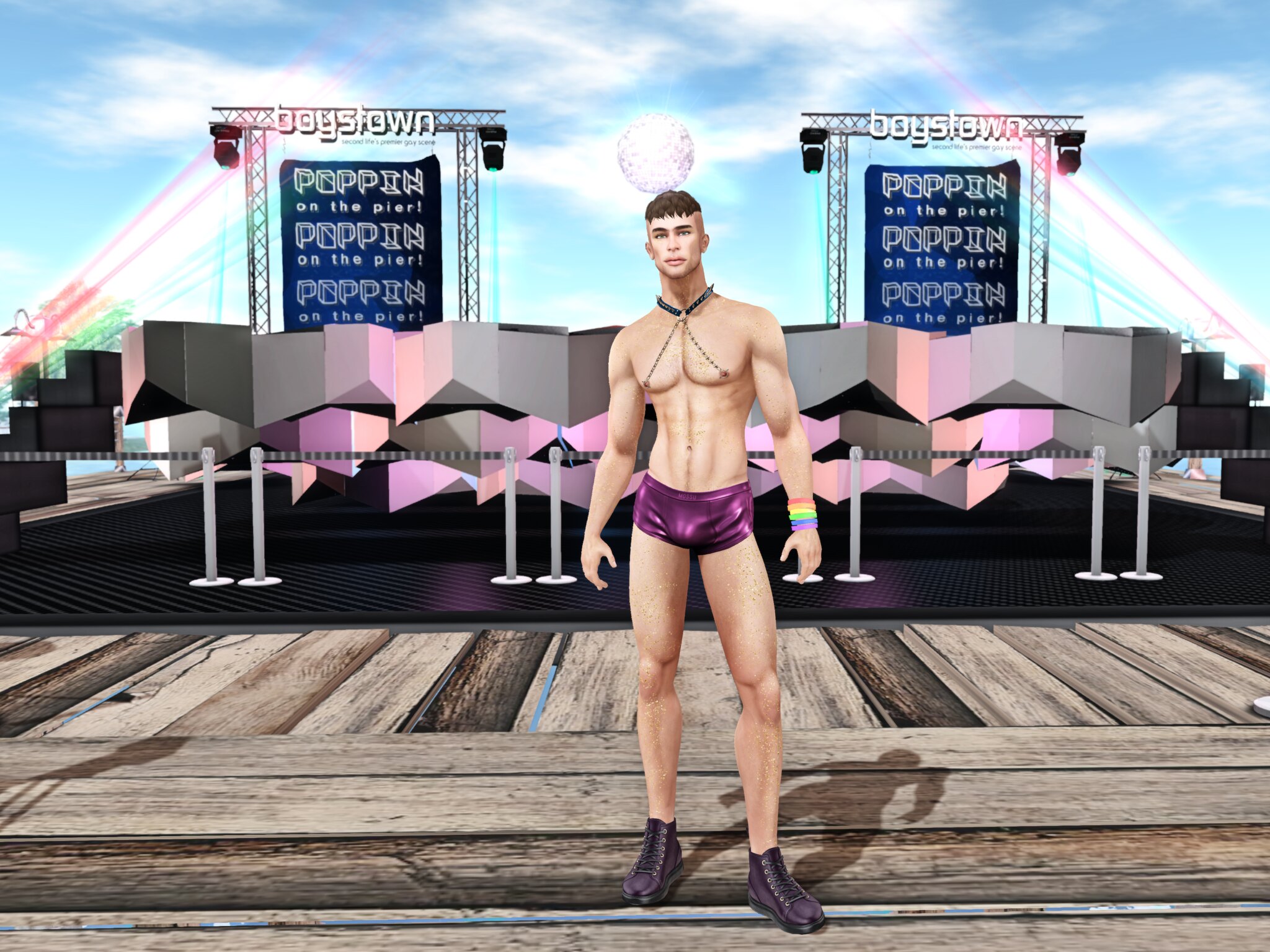 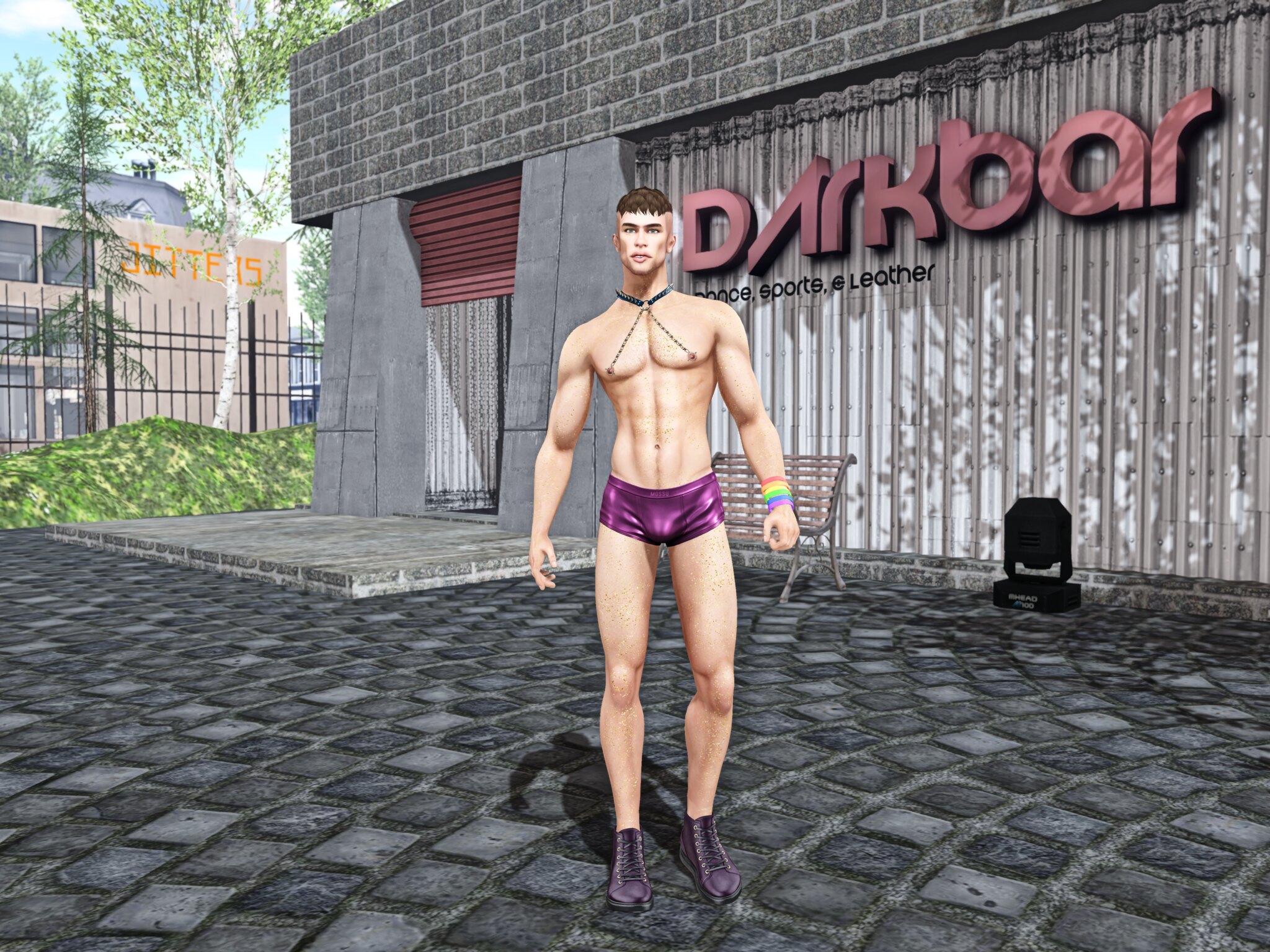 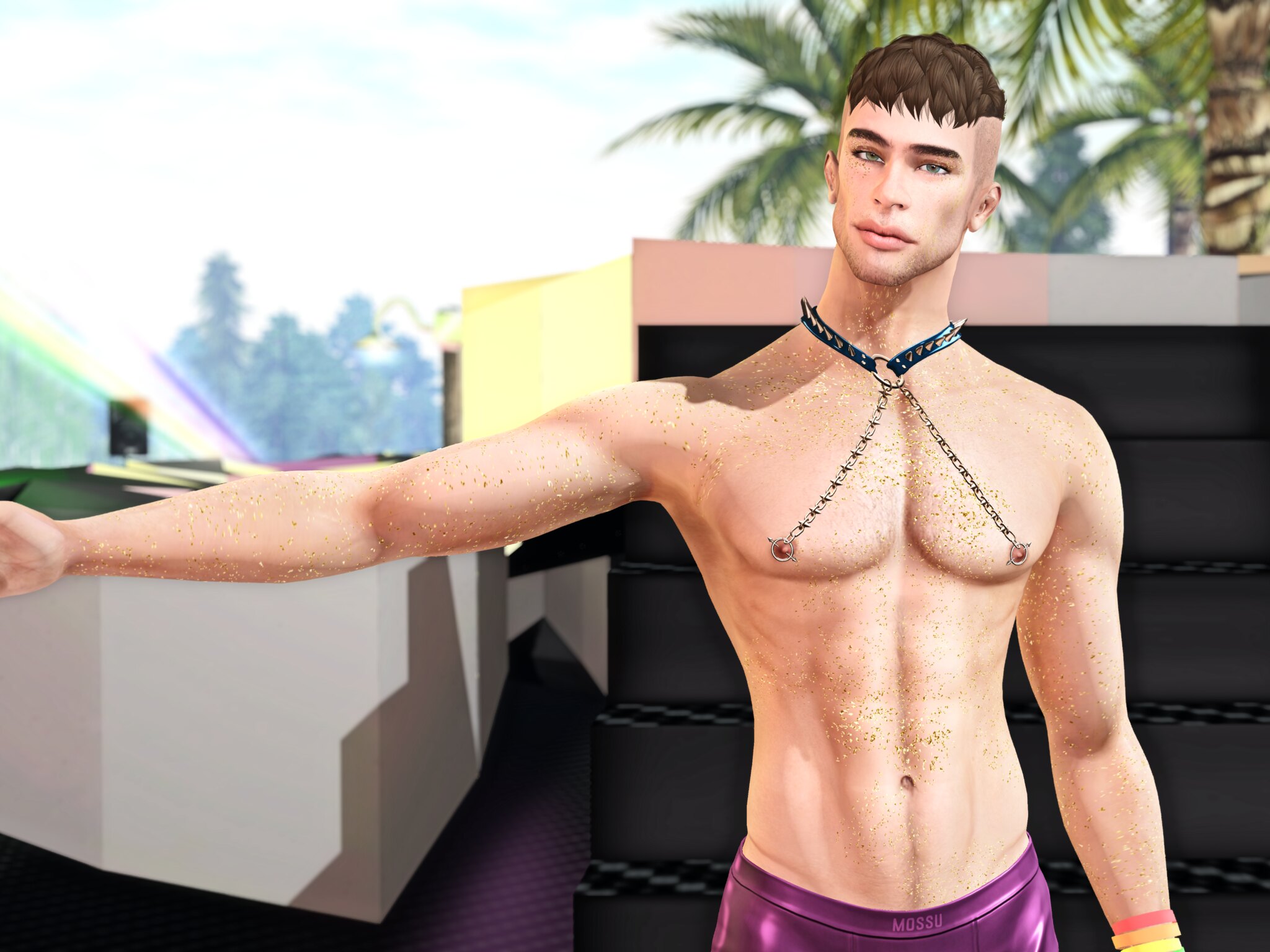 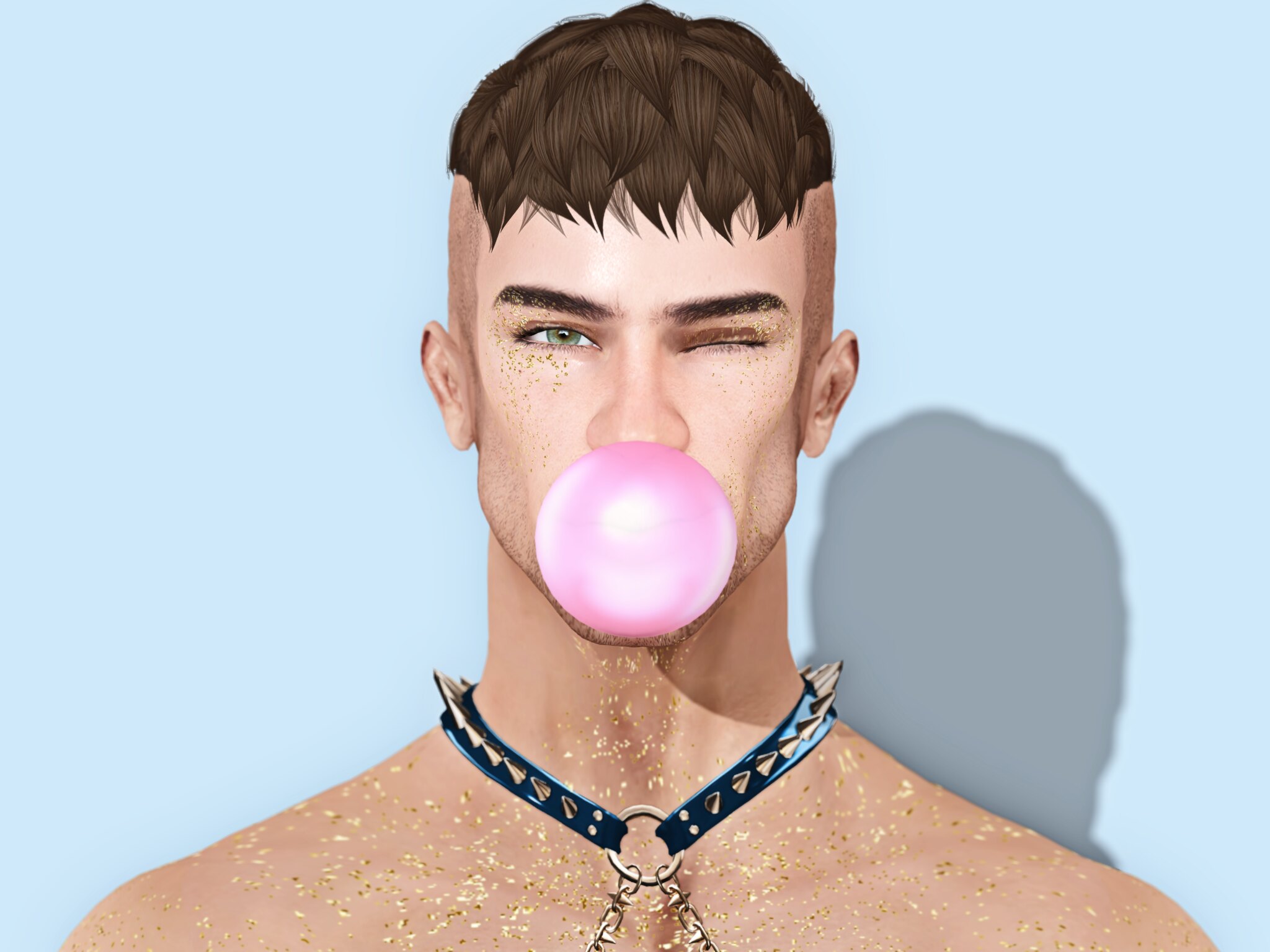 Harness: Mossu – Violent.Top – Blue – available at the June round of The Man Cave

Undies: Mossu – Violent.Underwear – Cherry – available at the June round of The Man Cave 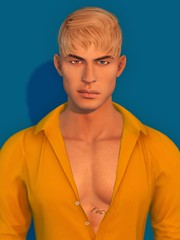 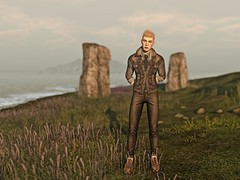 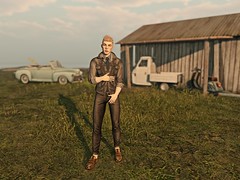